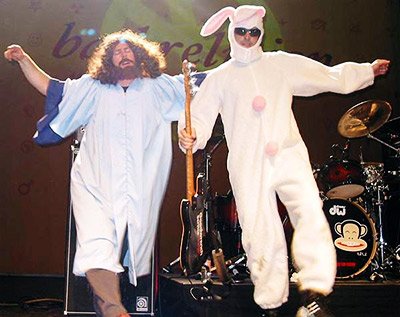 Bad Religion Past Is Dead

Home >
Bad Religion >
Past Is Dead

Tom: C Bad Religion - Past Is Dead Song starts with a main intro part like this: Play the above part 3 times and then go to this once: Then the totally awesome intro solo bursts in out of nowhere: Next comes the verse (also played behind the solo): Play that part twice, then go to the pre-chorus: Then hit the chorus, which goes like this: Now come to the post-chorus part: Then it comes to the verse, which you play twice. Then play the pre-chorus once, and come into the chorus exactly the way it is played the first time. Then it plays the muted post-chorus part (which is played all the way through), which, after having been played one and a half times, is followed by a repeatedly strummed G power chord. Then comes the solo (The chords behind which are just the chorus pattern of F-C-G-G played four times):