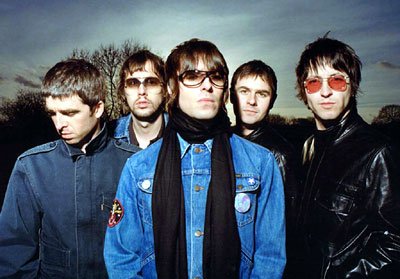 Tom: G TAB KEY: b = bend (7b9 means bend the string at the 7th fret to make the note the string would play at the 9th fret with no bend) r = release bend s = slide h = hammer on p = pull off So, first of all, here's the basic riff that Bonehead (guitar #1) is playing through most of the song: NOTE: In the transcription below, every place there's an exclamation point (!) above the tab, that's where Bonehead's riff above has been played through one time, to help you figure out the rhythm of the song. Before the drums and the other instruments chime in, there's a little of this: Now, we have Noel (Guitar #2) playing some of the parts with a dirty sounding distortion (some parts I don't have listed because they are hard to distinguish from the background noise in this song and aren't very important to the sound of this song as a whole, anyway), but Paul Weller (guitar #3) does most of the soloing with the cleaner, heavier distortion effect. So, after Bonehead starts his riff, right at the end of the last time through before Paul starts playing, Noel does this: Then, Paul: ! On the fourth time: ! ! ! Here, for 2 times through Bonehead's riff, Noel uses a muffled guitar effect and picks at an "Am" chord, something like this: Then, Paul: ! ! Here's where the song kind of stops for a minute: ! Drums & Bonehead pick up again: ! ! Paul: ! Then, Paul: ! ! ! ! ! ! ! ! ! ! !